In the past few years I've been living in Bulgaria, working remotely as a software engineer (technically, “consultant”) for foreign companies (both European and US), and by now I have a pretty good idea about all the taxes and other business-related expenses one has to pay in this setup. Since it's ridiculously hard to find a good and detailed breakdown like that (most often you'll find that income tax is 10%, and dividend tax is 5%, which is accurate but awfully incomplete), I just decided to put this page together. After all, taxes here are pretty simple, unlike countries like US.

Note that what I'm going to be talking about is focused on this exact case: being a resident in Bulgaria, and working as a freelance software engineer (consultant) for companies outside of Bulgaria. So e.g. if your line of business is different (not considered consulting), or maybe you're not planning to be a resident here, then some rules will change and I don't know much details. Also note that this is not about employment. By “freelance” here I mean that I have some sort of Service Agreement with my clients, and I'm not an employee.

One more thing to mention explicitly before we start: this article is intended to help you with accurate estimations and planning, but it's by no means 100% precise, meaning, you can't rely on it for the actual accounting and tax reporting. It's only based on my personal experience paying taxes in Bulgaria. If you actually move to Bulgaria, get yourself an accountant before you start working.

Overall there are two options: either register a company, or register your business as an individual consultant (software engineering is generally considered “consulting”). I was doing both: I started by registering a company and worked like that for a few years, and at some point switched to being an individual instead.

If going with a company, there are more sub-options like whether one only gets dividends, or has a salary and maybe some bonuses from the company, but I was only doing the dividends, because, as per my accountant, it ends up being cheaper (although this is being countered by a HN user, who is saying: “Past a certain threshold, with a company, the best option is to pay yourself a salary every month”. Check this followup comment for more details. My math still doesn't show how this can be true unless you're making like 50K BGN monthly. And since I personally was only going the dividends way, this article only focuses on dividends, as long as a company is concerned)

A short summary of those options is: having a company is considerably less convenient and more burdensome; in my opinion, the only decent reason for going with a company is when your income is below certain threshold, because it's cheaper this way (or, well, if you don't plan to be a resident here but want to have your business registered in Bulgaria, then having a company is your only option, but as I said above, I personally don't have experience doing that and I don't know much details). Another reason to prefer working as a company is the limited liability, but I don't think it's much relevant for software engineers, because a reasonable Service Agreement with the clients shouldn't put a lot of liability on software engineers in the first place.

Also, keep in mind that those who are not EU citizens or permanent residents, pay a bit less business-related taxes due to health insurance: they pay other kind of health insurance, unrelated to income at all. Fyi in my case it was about 200 BGN per year (I was getting just some bare minimum required insurance), and since it's not a business-related expense, it's not included in the calculations below.

The TL;DR charts for both cases: 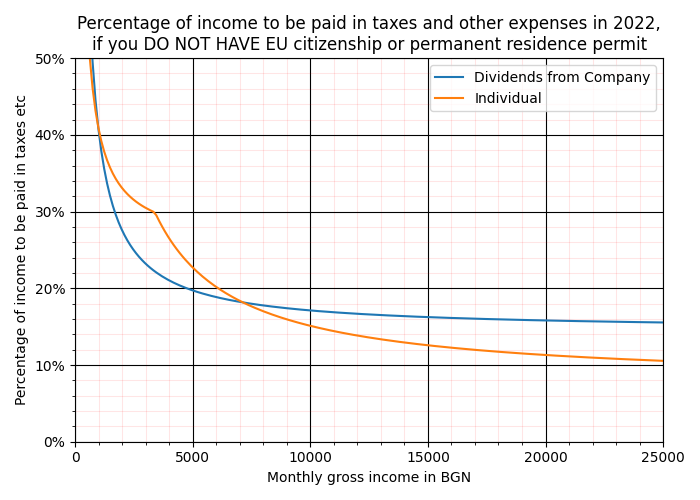 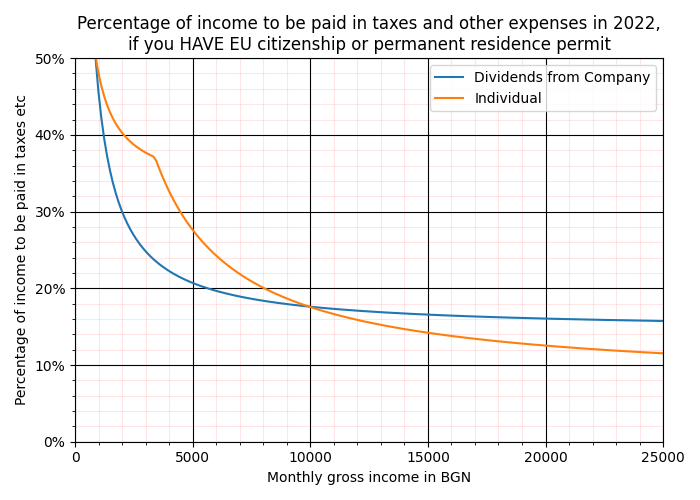 As you see, there is a tipping point where being a company stops being cheaper: for EU citizens or permanent residents it's around 8500 BGN per month, for others it's around 6000 BGN.

Source code to generate those charts can be found on github.

Now, let's break it down.

One has to pay the following business-related expenses:

Now, let's take a closer look at each of the two major options (company vs individual).

Working as a company

If you're working as a company, when you just received money from your clients, obviously it's not possible to simply start spending them on your personal things, since it's not your money. So first of all you need to come up with a plan on how to be making them your money. The approach that I was using is this: just wait for the end of year and then distribute dividends, and if I need money sooner than that, then make a loan from the company to myself (I'll explain more details about the loan below). It sucks to not have my personal money without having to do extra paperwork (to make a loan), but it's the cheapest way, so that's what I was doing.

Another option is to hire yourself, and pay yourself some monthly salary plus optionally bonuses: this way, you'll get your personal money every month, but it's a more expensive option so it defeats the purpose of working as a company in the first place. I'm not going into details about this option to hire yourself since I wasn't doing it personally and I'm not very familiar with all the subtleties. So, in the examples below I'll only be using the first option (dividends and, when necessary, loans).

As mentioned above, income tax is calculated against profit (that is, all incomes minus all expenses). However, when using a company just as a legal front for freelancing, the company's expenses are very small: only accountant and bank fees, so the tax is applied almost to the full received amount.

The above calculations don't account for loans, so they assume you'd just keep your money on the company's account, and only get your dividends in the beginning of the next year. If you do need to get some money earlier though (which I think is common), then the loan will also reduce your net income, but not by much. E.g. I was lending money from my company to myself for 4% per year, therefore when the loan is liquidated in the end of the year, technically my company was making another small profit from those extra 4% that I pay back to it, and therefore this profit is taxable in the same way (10% income tax plus 5% dividend tax from the remainder, so in total it's 14.5% from those 4%, i.e. 0.04 * 0.145 = 0.58% per year).

Working as an individual

As I briefly mentioned above, what is considered profit is different for companies and individuals. For companies it's easy: all incomes minus all expenses, since company must have dedicated bank accounts etc, but for individuals it'd be much harder to calculate reliably, since it's not too clear which individual's expenses are related to business and which aren't. So for individuals, government uses a simple model and introduces so called recognized expenses (in Bulgarian, “признати разходи”), which is a fixed percentage of the income. For different lines of business this fixed percentage is different, but for consultants, it's 25%. What it means is: government just assumes (recognizes) that, no matter how large my income is, I always pay 25% of it as expenses, and so the remaining 75% is now considered profit, and all the taxes calculated from those 75%. And it's pretty cool because, as you remember from the section above, the actual business-related expenses in our case are much lower than that. Effectively, the income tax becomes closer to 7.5%. And the social security which we have to pay reduces the tax base even more.

While the calculations above provide a very good estimation, there might be other small expenses, like those:

Working as an individual requires somewhat lighter paperwork than companies.

Opening a company using an accountant will cost you about 300-400 BGN (or about twice as less if you want to do it yourself), and then if you decide to close it, it's a long process which lasts about 6 months and costs twice as much as the opening.

For individuals it's a lot cheaper, both opening and closing, but opening requires an education document translated to Bulgarian. This kind of translation will cost you perhaps 30-40 BGN and a few days of waiting; after that's done, you just go to the Registry Agency (Агенция по Вписванията), pay 10 BGN fee, and you get registered same day. Closing is equally easy.

In either case (company or individual), due to our line of business, most likely you'll also need to do the VAT registration. It's something like 150 - 200 BGN.

Once the initial paperwork is done, every month you'll need to download bank statements (online), and send them to your accountant, together with the invoices for this month.

Also at some point you might need to translate your Service Agreement with your clients to Bulgarian, but not necessarily, it depends.

That's about it. Not too much really.

How company is more burdensome

So apart from the difference in taxes:

Historical values of min and max social security base

The min social security base is usually the same as the minimal salary, and you can see more historical data there: https://kik-info.com/spravochnik/mrz.php

And finally, let me reemphasize again that this info is only intended for a reasonably accurate estimation and planning; it's not enough for the actual accounting and tax reporting. If you actually move to Bulgaria, get yourself an accountant.

Taxes in Bulgaria, while not being the lowest in the world, are still pretty low. However if you're considering moving here, taxes should probably not be the only reason, as there are plenty of other things to consider. My own primary reasons to move here back in the day had little to do with the taxes, actually.

So, do your own research. I like a lot of things about Bulgaria, despite the fact that many locals tend to hate it, but it's definitely not for everyone.