The usage of real-time socket connection with authentication data seems quite regular thing to me. And, personally, I find it very strange that this topic receives so little interest. While I was struggling with it, the only related publication I found is the blog post by Liam Kaufman: Testing Socket.IO With Mocha, Should.js and Socket.IO Client. It is surely helpful, but I need more: my socket connections have access to cookies and authentication data. I need to test that too.

I also found a couple of questions on StackOverflow:

As I already said, I'm very surprised that the topic receives almost no attention: the aforementioned questions have no answers, no comments (except mine), and almost no upvotes.

So, I had to figure that out myself, and unfortunately it took me a lot of time; much longer that I was expecting. Anyway, now I have it working, and just want to share my experience with the hope it will be useful.

Overview of the problem

Before socket connection is established, client (usually a browser) initiates the handshake request. The browser sends cookies with this request (as with any other request), so, we can register socket.io middleware that gains access to these cookies and sets some data inside the socket connection. And passport.socketio does exactly that: it accesses session information from cookies, retrieves authentication data and stores it in the socket.

The main problem is that in Mocha unit tests we don't use browser, and there is nobody who would send cookies for us. We use socket.io-client, which uses XMLHttpRequest, and at the moment I actually failed to find the legal way to inject cookies to it.

First, I've checked how the tests for passport.socketio are implemented, and I found out that they monkey-patch xmlhttprequest, which is the used by socket.io. But the socket.io is a fast-moving target: a lot has changed since then, and this method does not work now as it used to. And anyway, it is a kind of hack; it's a pity that we still don't have an API for that.

But the passport.socketio-specific solution turned out to be rather simple: as a CORS-Workaround, passport.socketio allows session_id to be given as a query parameter, and this is easily achievable in tests, like this:

So, this is the feature we're going to exploit.

Probably the most convenient way to explain testing techniques is to provide an example. So, I've written example AngularJS application: socketio-passport-chat-with-tests . As is often the case with socket.io examples, it's a chat application. But, unlike most other socket.io examples, it uses real authentication with Passport, and the authentication data is available in socket connection.

To run the application, clone the repository, cd to it, and run the following:

Now, you can start the application. Note that you need to have running mongodb daemon for it to work.

Then, navigate in your browser to localhost:7081, and you'll the something like this: 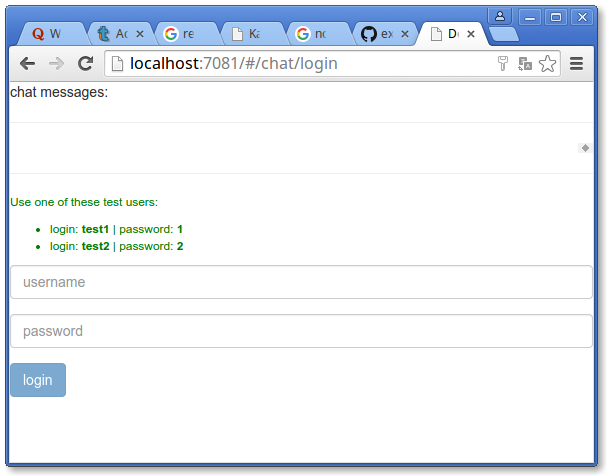 As the hint suggests, you can log in with the following credentials: 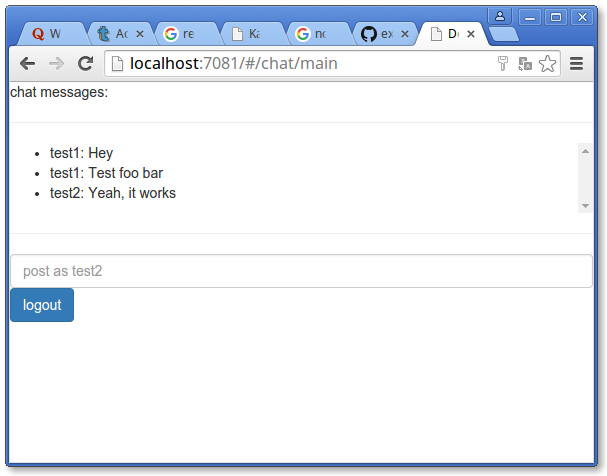 Actually, the application turned out to be a bit more complicated that I was planning: authentication involves some additional stuff. And, by the way, there are a couple of additional challenges that I faced to ensure that socket's authentication data is in sync with cookies. I hope I'll find some time to write a separate blog post about it, but for now, I'm going to focus on testing stuff.

As you may see from the above explanation, we have the following functionality:

So, this is what we're going to test.

We will login and logout many times in our tests, so, it makes sense to create special helper functions for that. I put these helpers in test/server/unit_helpers/auth.server.test.helper.js:

Now, go on to actual chat functionality tests. In the repository, it is stored in the file test/server/unit/chat/chat.server.controller.test.js.

We will play with two users: testUser1 and testUser2. Before tests, we create these users, and after tests, we remove them. Note that the database used for tests is different from production (and development) database, so, we will not interfere with whatever actual data stored in real database.

So, during tests, we will try to send messages by these users, and collect information about each user, like:

Also, each user should have its own agent, returned by supertest, in order to keep cookies.

The test plan is divided into 2 parts.

In order to implement them, we need for a couple of building blocks.

Initially, we need to create some dummy credentials and prepare objects for user statistics:

And here we have a function that resets (or initializes) statistics for users:

There are a couple of functions that perform socket connection passing session_id.

And a simple function that drops socket connection for both users:

And now, main function in which we send messages by users. If you look at the two parts of the test plan described above, you'll see that they are actually quite similar: the only difference is that in the second part, user2 is not logged in. In either case, both users should try to send messages, but we expect different statistics: when user is not logged in, he/she is not able to send messages.

So, it makes sense to define some common function that will send messages and check statistics depending on given parameter.

Before we proceed, there is a list of socket events emitted by the server:

Now, let's write some describe blocks with before/after routines: as I already mentioned, we need to create test users before tests, and remove them afterwards:

Now, after all, we can write exact test sequences.

Done! When we run tests by typing npm test, we have the following log:

That's great: after all, We've got socket.io + passport.socketio tested by Mocha.

This is so awesome ! Thanks a bunch for sharing it. Clearly, you've put in tons of meticulous effort. Btw, how long did it take for you to create this ? For e.g. I had no idea that this 'userData.sessionId = sessionIdSigned.slice(0, sessionIdSigned.lastIndexOf('.')).slice(2)' needed to be done.

Unfortunately it took a lot of time: probably a couple of days. As to userData.sessionId = sessionIdSigned.slice(0, sessionIdSigned.lastIndexOf('.')).slice(2), it's clear if we know how do signed cookies work: the value you store as a cookie is augmented by the signature before actually being stored. Of course, we could avoid such a hackery with slice and “unsign” the cookie properly, but for test case, I decided not to care.

I'm struggling a bit to understand when and how userData.sessionId is being populated. sandeep seems to have figured it out but I'm at a loss. And to be clear, your socket session is sharing a session id with the agent, correct?

UPD: see the next comment for a real answer.

Actually, after more than a year, I barely remember what it's all about, since I never had to deal with this stuff again. So I might have mistunderstood the question; however, if I get the question right, then, the answer is: we pass userData.sessionId as a query string parameter when creating a websocket instance. Here:

Or, what do you mean?

Ah, it seems I get the question. And, by the way, I found that, weirdly enough, I indeed did not explain it well in the article. One needs to check the example project I prepared at github to get the full picture.

Look at chat.server.controller.test.js file, function _agentLoginCallback(): we get (signed) cookie from the agent, “unsign” it in a hackish manner, and store in userData.sessionId:

And, answering the second part of your question:

And to be clear, your socket session is sharing a session id with the agent, correct?

I hope now it's more clear to you. If not, feel free to ask more questions! :)

You made my day !